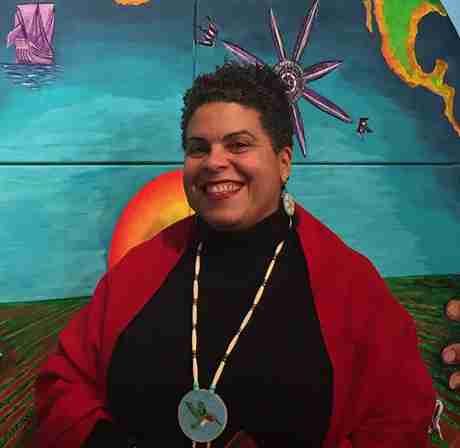 Vivette Jeffries-Logan (Kanahabnen Tabunitckia translation: “Morning Star”) is an enrolled member of the Occaneechi Band of the Saponi Nation (OBSN); the Indigenous people of Orange, Alamance and Caswell counties in North Carolina. She is Founder & Principal of Biwa Consulting; her independent Leadership, Organizational Development, Equity and Training consulting business. She served her People as an elected member of the Tribal Council and as Founding Director of the OBSN Tribal Health Circle. She is currently participating in the North Carolina Native Leadership Institute of the American Indian Center at the University of North Carolina. a culturally tailored leadership training program in the state for current and emerging Native leaders who are interested in sharpening their leadership skills, expanding their networks, and fostering unity across all tribes and Indian communities in North Carolina. She serves on the Leadership Team for the Journey of the Spiritual Warrior.

For 10 years, Vivette was a trainer with Dismantling Racism Works (dRworks), a collaborative of trainers and organizers who have been facilitating Dismantling Racism work for many years. Most recently she served as the Director of Training and Technical Assistance at the NC Coalition Against Domestic Violence where she provided oversight and direction for the Training Team and a statewide Training Institute.  In October 2013 she participated in the Standing in Our Power (SiOP) Transformative Leadership Institute and was honored to be asked to serve on the Core Leadership Team. She has been a panelist, guest speaker and lecturer at the Centers for Disease Control (CDC) a local Medical School, Schools of Social Work, School of Public Health, the NC Department of Health & Human Services Building Bridges Conference, UNC Pembroke Infant Mortality Symposium, Comparative Religion classes, the American Indian Women of Proud Nations Conference and the New Directions in American Indian Research conference.

In 2012, she was recognized as an Honoree at the Women’s Honor Ceremony during the American Indian Women of Proud Nations Conference. United Tribes of North Carolina honored her with the Distinguished Service to Indian People Award at their 2010 Unity Conference. Vivette was also honored with the with the 2010 Alumni Excellence Award from Guilford College.

Vivette earned a B.A. in Psychology and Community Studies from Guilford College and an Associate’s Degree (A.A.S) in Hospitality Management from Alamance Community College. She is also Certified Executive Chef with 17 years’ experience in Hospitality Leadership and Management.

She lives in Hillsborough with her husband Douglas and their sons Uriah and Elijah.

Human Rights, Civil Rights and Social Justice are her passion and her purpose. She is passionate about dismantling all oppressive systems and replacing them with an equitable system that ensures all voices are heard and all cultures are valued and integrated. She lives and works striving to facilitate equality, equity and justice for all.